Harihar fort – Entry Banned in June 2019 for complete monsoon season. Later also there will be an entry fee for trekkers. The income from fees will be utilized for improvements on fort Harihar.

This decision is taken since last week there was traffic jam due to too many trekkers climbing at the same time, this is something similar to the historic Everest traffic jam this year.

Trekkers should take care since the steps of this fort are dangerous and too much crowd can cause fatal accidents. Last year also some incidents took place due to selfies etc. 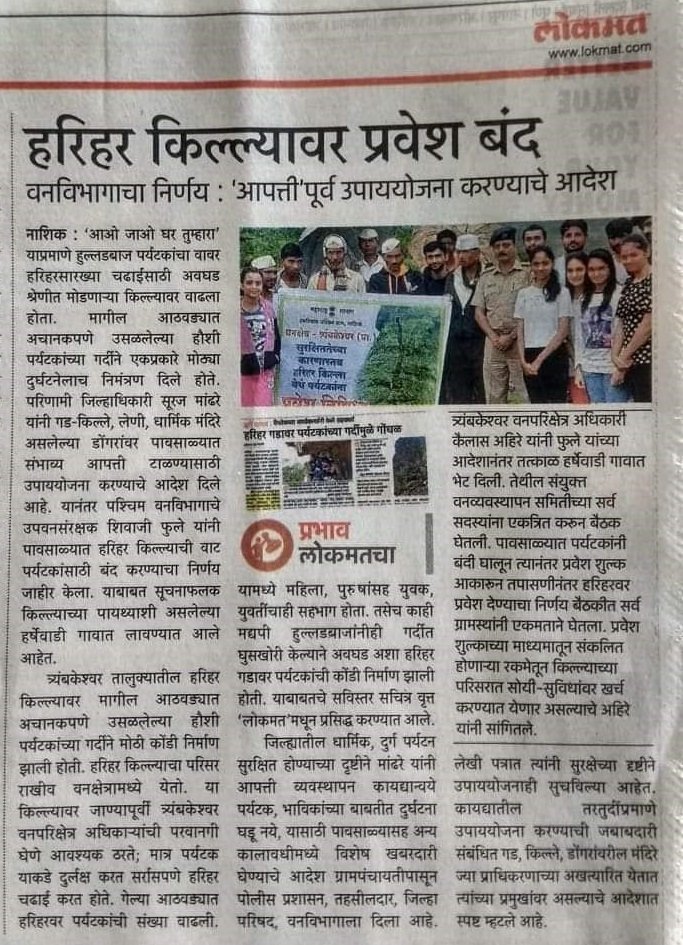 Harihar fort is located in Trabakeshwar forest zone. The base village is Harshwewadi where a meeting with villagers and forest department took place to take decision on entry ban during monsoon season to avoid any accidents.

It is most famous fort among trekkers due to the stairs carved to notch to make a perfect grip. The stairs are large and safe to climb if there is no crowd, however if many people are standing on the same location ascending and descending then there may be serious safety issue during rainy season.

Trek to Harihar Fort, Igatpuri is really a dream during monsoon due to lush greenery and stunning views from the top of fort. During monsoon most of the time the steps are embedded into dense fog or clouds hence giving you a feeling of entering into heaven.

On the fort top there are two temples , one of lord Hanuman and second of lord Shiva

The trek is not that difficult, however extreme care needs to be taken during monsoon due to heavy rains and sleepary stairs.